Our train arrived in Fez early evening. As the sun was going down and it was only pretty hot, rather than ridiculously hot, we decided to walk to our accommodation. It took us about 40 minutes, which wasn't too bad. We stayed at Riad Dar Rabha. Our room was just off the lounge area, which was quite handy, though not entirely private as the window and door were stained glass, so you could look into our room if you really wanted to (not that people would). The bathroom had a door though, which was a bonus, though the shower was one that just sprayed into the bathroom itself, so the whole floor would get wet. So some slight annoyances, but generally the riad was really good.

As we were there during Ramadan, the riad would put out free food after sunset, which we were welcome to help ourselves to. This was especially useful on our first night as it was already quite late and it saved us having to look up a nearby restaurant. We got chatting to 3 English girls and 3 Australian girls. The English girls asked if we wanted to join them on a tour of the Medina the following morning, so we could split the cost between us. We'd not looked up anything to do yet, so this sounded a pretty good plan.

So, on our one full day in Fez, we had our free breakfast (mostly breads and jams) then went on a guided tour of the Medina (the old town area - in case you didn't read my Marrakech blog). The guide was great, showing us all the major sights, telling us about the history of Morocco and Fez and throwing in some personal anecdotes too. In total it lasted about 5 hours! Though that thankfully included a late lunch at a family restaurant. I wasn't so fussed on the parts where we went in shops, as of course we'd get the sales pitches, but no one was pushy - it was all a lot more laid back than Marrakech. Plus some of the sales places were interesting - we got to go in a tannery and see the people working (they give you a sprig of mint to mask the smell!) - plus we went to a Berber carpet place where we could see some weaving and were given some free mint tea. 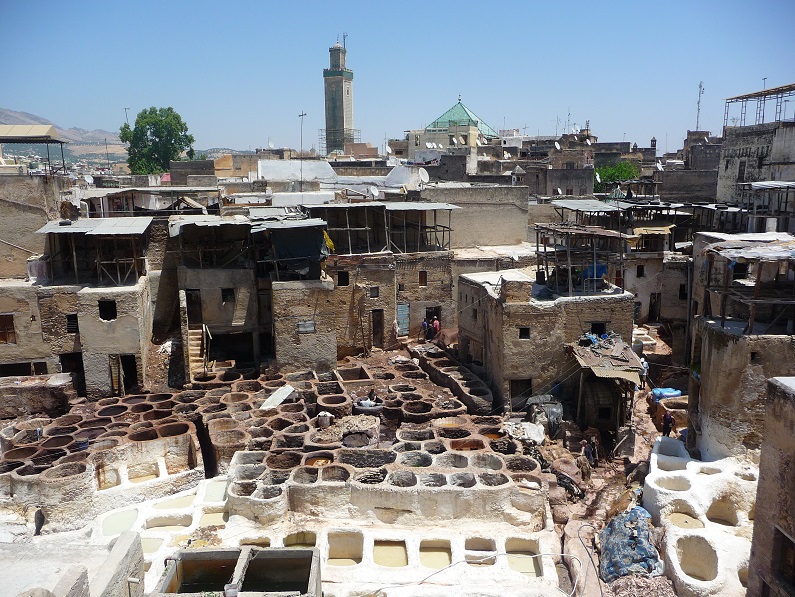 All in all it was a great tour and well worth the money (about £5 each). Plus it saved us needing to find somewhere for lunch and we then got more free food in the riad in the evening.

The following morning we caught the train from Fez to Tangier (we got a taxi to the train station this time). The journey was about 4 1/2 hours. We got to Tangier at about 3pm, which gave us 3 hours before our ferry was due to leave Tangier Med port. We'd deliberately given ourselves a while to get to the port as we'd found it difficult to ascertain how we were meant to get there. A train line had apparently opened, but finding confirmation or timetables was nigh on impossible. We got to the main Tangier train station to see that a train was due to arrive from Tangier Med in an hour or two, but none were due to go there. Not very helpful. The other possibility we'd found online was a bus that ran from a street near the bus station. As it was only a 15 minute walk away we headed there. I'd assumed the bus stop would be obvious, but it really wasn't. None of them said which buses stopped at them. As we were musing over which bus stop seemed most likely, a guy asked us if we wanted a taxi. We said we were taking the bus to Tangier Med. He verified the right bus stop for us, but said it wouldn't be running for the next few hours due to Ramadan. I was skeptical, but it was also annoyingly plausible. He offered us a decent rate and as we were keen to ensure we got there, we accepted.

Unfortunately, on arrival at the port, we were told that our ferry had been postponed from 6pm to 8pm, supposedly due to Ramadan. It's not like Ramadan's a surprise though, so why not change the actual timetables in advance? Frustrating. What was even more annoying though was that it didn't even leave at 8pm. The ferry eventually left port at 9:30pm. No explanation or updates as we sat waiting (and playing Uno) for hours. Then when we could go on the boat, it wasn't obvious where we were meant to be going. Still, we had plenty of space once we were on board - we were the only foot passengers and there were just a few others with cars.

Quite a long and tiring day, even though we were just sitting around for a lot of it. But we eventually said goodbye to Morocco and headed back towards Europe.

Posted by chantalpatton 15:07 Archived in Morocco