We had a few days in Lisbon, so got to see a decent amount of the city. We did a fair amount of walking around, as we always do, plus on one day we took the tram out to the Belem area where we saw the Belem Tower etc. It was a really nice area, though full of tourists. We went for coffee and a portuguese tart (pastel de nata) while we were there (yum). We also popped into the Electricity Museum, just because it's free. You basically walk around an old generator. Not something that would make me say 'wow, go see it', but if you're in the area and you've got a bit of time to kill... We had fun critiquing the lack of realism in some of the models of towns.

We also went into the free part of the San Jeronimo Monastery while we were in Belem. That's worth seeing: 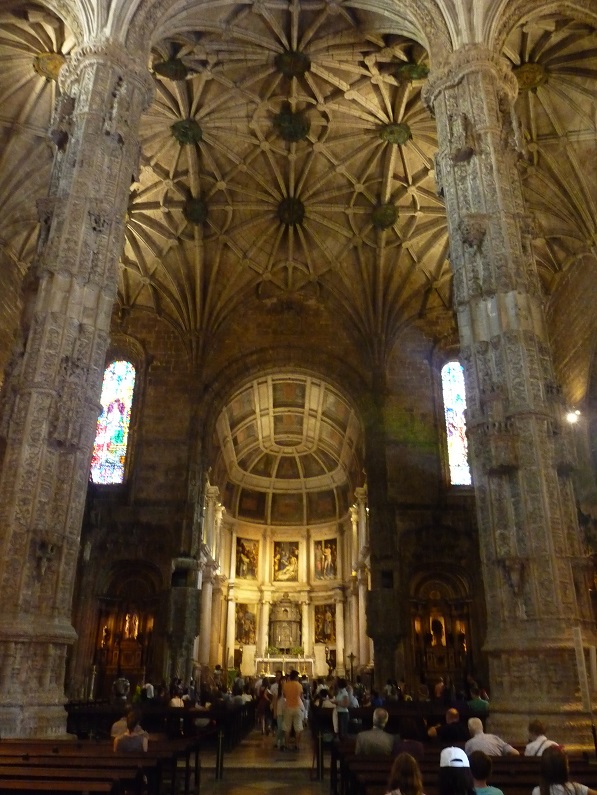 One of the big things to do in Lisbon is to ride the number 28 tram, which goes through all the narrow winding roads. Someone in Fez had told us about it and said it was almost like a rollercoaster and definitely worth doing. It's recommended that you get on at the first stop, otherwise you won't get a seat. What we'd not expected, however, was the huge queue at the first stop. We tried one morning but the queue was too long, so we went back in an evening when the queue was only moderately long. We still had to wait quite a while before we got on one of the trams. What was really annoying though was that a guy and his wife jumped the queue just in front of us. People like that make me so angry. Still, we eventually got on a tram, got a seat and... it was pretty disappointing. The traffic's too bad for the rollercoaster effect to really work, so you're basically just on a really slow tram travelling through a few streets. It's a nice enough route, but we'd mostly covered it by foot already and it definitely wasn't worth the ridiculous queue. Still, on the way back into the centre, we had a slightly surreal encounter. People will try and sell you things in Lisbon quite a lot - particularly hash - the amount of that being offered was slightly ridiculous. But you also get people selling sunglasses and head scarves and general things like that. What we weren't expecting though, on our walk back down into town, was a guy to appear and offer us a paper frog. Yes, you read that correctly, he was selling paper frogs. We were so used to just refusing any offer of anything, that it took a few seconds for us to even realise what it was he'd just offered us. A paper frog? Really? Who's walking down the street and hoping they can find one of those? We stood and watched him for a while, from a distance, offering paper frogs to people and being rejected every time. We kept laughing about it as we walked back to town - it's possibly something where you needed to be there, but we found it very funny. We did also start to regret not buying one, just for the novelty value.

I just realised I've not mentioned where we were staying in Lisbon. We stayed at Golden Tram 242, which was in a good central location. We stayed in an 8 bed dorm, though I don't think it was actually full at any point. It was a nice, clean dorm though, plus each bed had it's own curtain, light and plug socket, so you felt like you had some decent personal space. Breakfast was included as well, which was a good and chunky bread roll with cheese and ham, plus a slice of watermelon. There was juice, tea and coffee as well (though the coffee was pretty grim). What was slightly weird was that you had to pay extra if you wanted cereal, but as the rest of the food was pretty filling, you didn't really need it.

On our last full day in Lisbon, we did a free walking tour. The company was Pancho Tours and it was really good. The history and humorous stories about various buildings and monuments are things you just don't get when you're walking around by yourself. We also went in an old casino which looked quite Moroccan on the ground floor, but then looked more Parisien on the upper floor. However, the best part of the tour was something that wasn't actually part of the tour. We walked to the area where we'd previously seen the paper frog man and were given a 5 minute break to check out the views and grab some water etc. We'd seen the views already, but on our way to grab some water we saw the paper frog guy again! He was in the exact same spot. We wondered if he was just there all the time, but we did then return later in the day and he'd gone, so I guess not, we were just lucky to see him twice. Anyway, after regretting not buying a paper frog, we were now tempted to get one. He must have seen us hovering around and looking at him as he made his way over to us. As we were a captive audience and not just walking past, he went on to demonstrate the paper frog and all the things it can do. Yes, not only is it a frog made of paper, but you can do things with it. It can look happy or sad, it can stick its tongue out, it can... ok, that's about it, but still, it was even better than we'd realised. And the guy demonstrating it was so so sweet. We were slightly worried it would be too expensive, but it was just 3 Euros, which we were happy to part with. So yes, we now have a paper frog. The guy was so chuffed he also gave us a copy of a poem he'd written, which was really sweet, although it's in Portuguese and we therefore can't understand it (I'll have to run it through Google Translate at some point!). 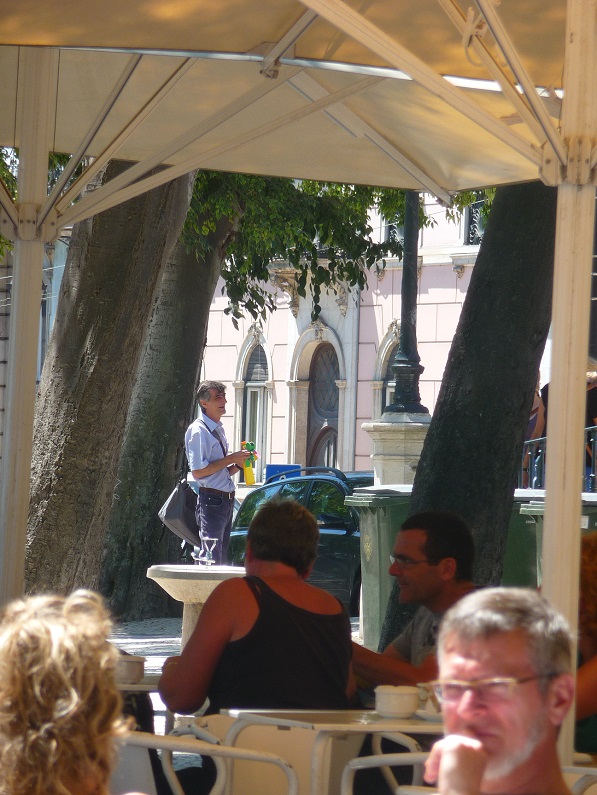 That evening we also came across an unusual sweet shop called Dream Pills, where you take a pill bottle (they come in various sizes for different prices) and then fill it with as many pick 'n' mix sweets as you can. You can then choose a prescription label for it and have it rung up by a guy dressed in a white coat. Bizarre but ace. Here's our bottle: 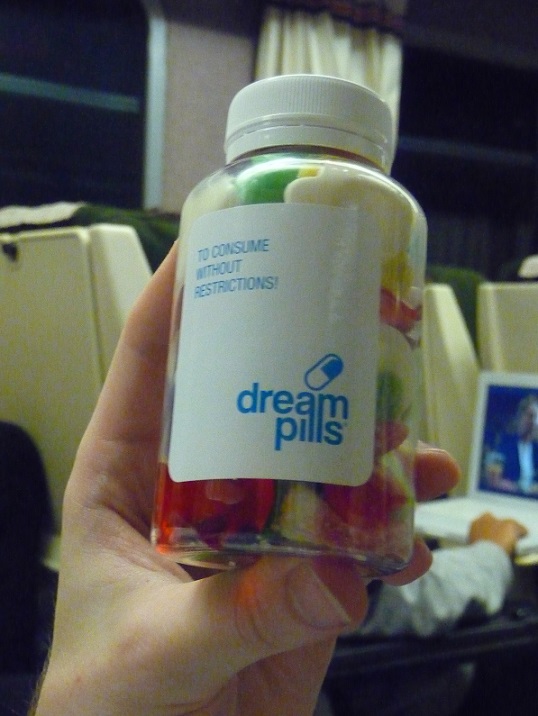 On our last day in Lisbon we went to the Oceanarium - partly because it was near the train station where we were catching our train to Madrid, but also because it sounded really great. It wasn't cheap, but it was worth it, it's a really good size and there's a great variety of animals including otters, puffins and penguins, as well as the expected fish, sharks, rays etc. Also, the temporary exhibit at the time was one with sea turtles! Yay! We started off there and then moved on to the regular exhibit. As well as predictably enjoying the sea turtles and otters, there were lots of other really cool creatures too, including a variety of jelly fish, plus some sea dragons, which I'd never even heard of before. We both took a ridiculous number of photos. 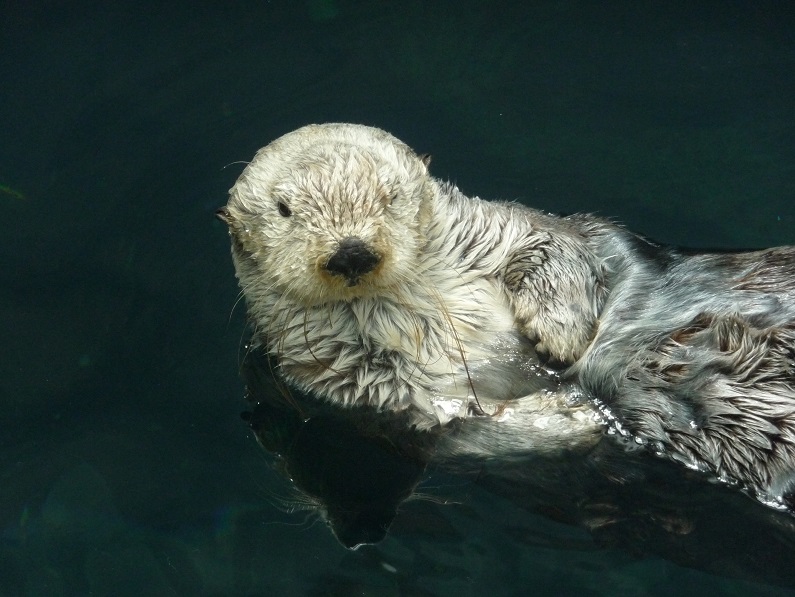 After that we still had a bit of time to kill before our train, so we lounged around on some shady grass for a while (where a little lizard came and sat on Jamie's bag), went for a drink, then went and had dinner at Wok To Walk (one of Jamie's favourite places). We actually went to 2 Wok To Walks in Lisbon and have since been to ones in Madrid and Barcelona as well! I think I'm Wok To Walked out for a while.

Posted by chantalpatton 07:22 Archived in Portugal