We arrived on the island of Langkawi and took a taxi to our hotel - the delightfully Twin Peaks evokingly titled White Lodge. We had a room to ourselves, so with a double bed and a single bed. It was a nice place - no complaints about it. No breakfast included, but that was fine.

After being away in the UK, it was strange being back on the trip. Especially as it had continued in my absence. Naturally Jamie and Martta had struck up their own rapport and way of doing things in my absence, so it was now like I was joining their trip - my previous trip with Jamie had gone, which made me somewhat sad. This wasn't anyone's fault, it was just an unfortunate side-effect of my being away at the time that I was. Still, it was difficult to adapt to. I know that this made me quite bad company a lot of the time, for which I apologise, particularly to Martta.

Anyway, Langkawi. The beaches are one of the biggest draws, so we spent a decent amount of time there. Not so much in the sea though as it's full of jellyfish. It was far preferable to hang out at a nearby bar and order some jugs of beer! 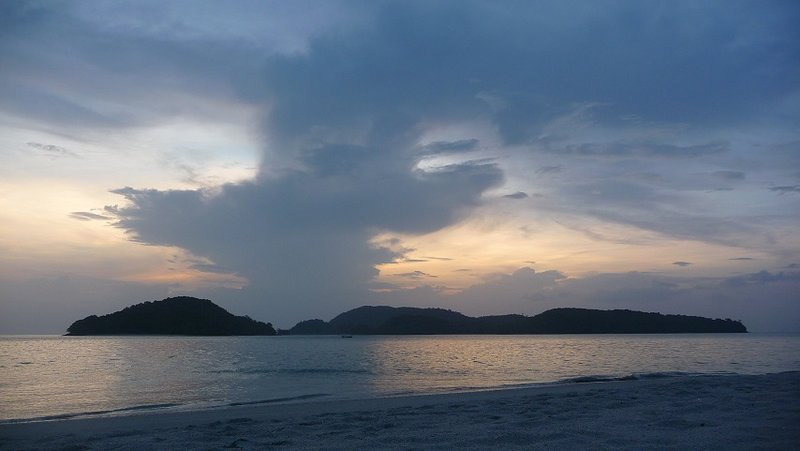 Another major thing to do is to ride up the cable car and enjoy the view. We tried to do that, but the cable car wasn't running due to high winds. Thankfully though, the area around the cable car was quite fun to walk around anyway. There's an area with a load of rabbits you can feed, plus a cafe that's attached to a tiger enclosure. We then also went to a sealife centre, back near where we were staying. It wasn’t up there with the amazing one we went to in Lisbon, but it was still really enjoyable. My only complaint was that they promised otters and didn’t deliver. Tsk tsk.

We did also get up early one morning to go and see the sunrise. Yes, you did read that right. That's the extent to which I didn't want to feel left out of things. Although I did kind of regret it as we needed to get up extra early, in order to get to a decent lookout spot, but then it was so cloudy we couldn't actually see the sunrise happen. It confirmed my previously held belief that sunsets are far superior. Although, on the plus side, we did then go for a really nice breakfast at a French café.

We left Langkawi on a ferry to Penang. Martta and Jamie had stayed out quite late the previous night and Martta was a bit worse for wear. We'd read that the ferry crossing was pretty rough and unpleasant, which didn't bode well, but thankfully it was fine. We all even managed a bit of sleep on it.

Posted by chantalpatton 01:52 Archived in Malaysia