Georgetown was really just a stopover between Langkawi and Kuala Lumpur. We were only there for about 24 hours, as it's not that exciting, but we had a decent time.

We stayed at Red Inn Court, which was walkable from the ferry port. It was a decent little hostel. We stayed in a 4 bed dorm, along with a guy from Evesham. He seemed quite excited that I used to live in Worcester and therefore knew where Evesham was.

On the night we arrived we went out looking for somewhere to eat. We decided on a really busy place as figured that meant it must be good. It also meant we had to wait for a while before we could get a table, but it was totally worth it, the food was great. I had the sweet and sour pork, as someone in the queue (though I use the word ‘queue’ quite loosely) had recommended it to me. I’ll generally go for chicken over pork, but in this case it was a perfect choice – definitely the best sweet and sour pork I’ve ever had.

During our one almost-full day in Georgetown, we went and checked out Fort Cornwallis. It was a decent place to walk around for a while, plus entry was cheap. Although Martta bought us some odd-flavoured ice lollies to try out. We chose at random. Jamie lucked out with the non-weird flavour of coconut; Martta got the slightly-strange but not bad flavour of Jackfruit; but I got the bizarre taste sensation that was the Durian flavoured lolly. I could hardly eat any of it. Fruit shouldn’t have an onion-esque element to it. And the aftertaste!! Eugh.

After that we tried to go to the Komtar Tower for the scenic view, but got there to discover it was closed. So instead we had a scenic walk back to the hostel and also nipped into a small art gallery for a while. That was really good – I’ve annoyingly forgotten the name of the artist being showcased, but I really liked his work. Plus the curator spoke to us about him for ages, it was really nice.

One of the temples we saw on our walk (I liked the giant incense): 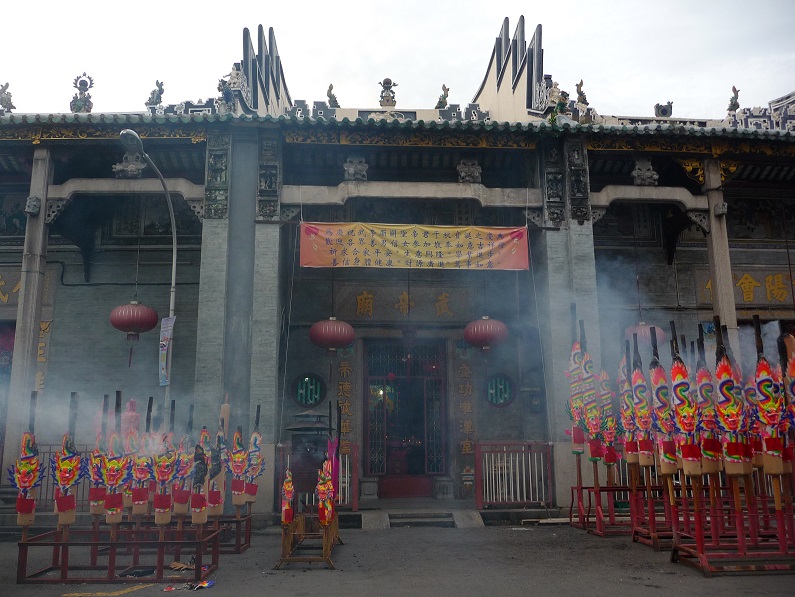 In the evening we then made our way to the train station, which involved taking a short ferry ride first. We’d been planning to book beds on the train, as it was overnight, but as we’d only booked earlier that day, the beds were all sold out and we had to make do with seats. This made for a pretty sleepless night as we made our way to Kuala Lumpur.

Posted by chantalpatton 07:43 Archived in Malaysia