The day after finishing work, we found ourselves on a flight to Havana. Not that this was some kind of shock - we'd booked it in advance as part of our slightly-epic travel plans. We arrived in the evening and went straight to the currency exchange in the airport (as you can only get the currency within the country). With that sorted, we headed towards the taxis. We had the address of our accommodation written down (as our Spanish is virtually non-existent) - we showed it to the woman in charge of bundling people into taxis - she showed it to a taxi driver and we then put our stuff in his taxi and off we went.

I don't think we'd even left the airport complex when the taxi driver started asking us things in Spanish. It soon became apparent that he wasn't entirely sure how to get to the address that he'd been shown. This was somewhat problematic, as I'm sure you can imagine. Thankfully, as well as the actual address, our booking confirmation from Hostel Bookers included written directions from the airport to the Casa Particular (where we were staying). They were in English, but we gave them to our driver anyway and he seemed slightly placated by them. It's somewhat disconcerting to be in a taxi in an unfamiliar place in the dark when you're not sure that the taxi driver even knows where he's going. Hell, I once got in a taxi at night in Cardiff and it took me quite a while to realise that the driver was going in completely the wrong direction to where I lived as I got disoriented and it's harder to make things out when it's dark. But back to Havana... after an impromptu stop at a petrol station, where the driver filled up with petrol and also seemed to do some shopping, we got to an area of the city where it seemed like we were driving up and down a load of small alley-type streets and quite possibly going round in circles. I was sure the driver was lost and wondered how on earth this could all possibly end when he suddenly stopped and claimed we'd reached our destination. I was initially sceptical, but sure enough he'd gotten us there - I'm not entirely sure how. He then had the cheek to ask for a tip! We declined.

After ringing the door bell, a key was lowered down to us on a piece of string. Mysterious! We opened the front door and started climbing up the stairs. There were quite a lot of stairs and the only light was flickering in a creepy manner. As a first introduction to a country and a city, it was all pretty sinister. Thankfully, once we got up the stairs to the apartment we were staying at, we were greeted by a very friendly and lovely couple - Ana and Alberto. Staying at Casa Familiars in Cuba is kinda like staying at a B&B I guess, except it's a bit more of a personal service and there's often just the one room that's rented out (though there are plenty with multiple rooms as well). In Havana we stayed at Casa Ana Morales. It had a really nice homely feel. Our room was a great size too, with ensuite and air conditioning (which was essential!). They made us coffee on our arrival (which was really nice) and Jamie spent quite a while chatting to Alberto about Cuba and politics and such like things (he was in his element).

The next morning we were able to look at the street we were staying on in a new light (one that involved actual light!). It wasn't the scary back alley it had initially seemed, it was actually quite a busy street (albeit not a main one or anything). From the apartment balcony we marvelled at all the beautiful vintage cars that you see all over Cuba - they've managed to keep them running for 50 years or so and it's a much more attractive sight than all the dull modern cars you get.

Watching cars from the balcony: 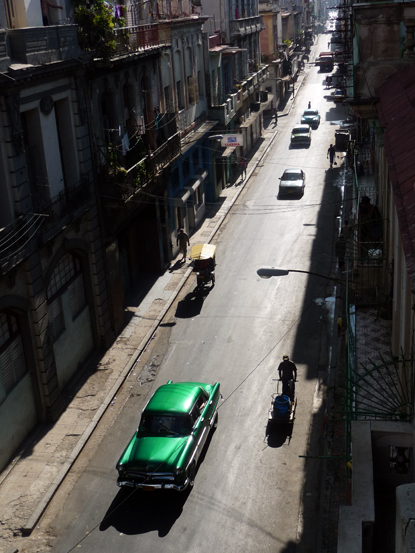 We had our breakfasts at the Casa (which you pay extra for) and they were really good - lots of fresh fruit, coffee, fruit juice, bread rolls, plus an omelette. Set us up for the day well.

One thing you quickly get used to in Cuba is hearing the word 'taxi' shouted at you. It might start to lose all meaning. You also get people trying to sell you cigars, though this is slightly more subtle than them just shouting the word 'cigars' - they'll spark up conversation by asking you where you're from (say 'Wales' if you want to confuse them), where you're staying, how long you've been in Cuba for... they'll then tell you about this one day special event that happens to be going on today, where you can get all these amazing cigars for cheap. Hint: say you've been in Cuba for a while and they realise their tactics won't work and they wander off.

During our first day in Havana, we had a bit of a wander around, orienting ourselves etc. It takes a while to adapt to all the hustle and bustle, as well as the heat! It was in the 30s, which makes it difficult to spend too much time walking about and being unnecessarily active. At least if you're me. We spent a decent amount of the afternoon at the Museum of the Revolution. The name's self-explanatory. That was enjoyable (and interesting). We also spent a while walking around, despite the heat.

On our second day we went on a bus tour around Havana. It was much longer than I'd expected, though that was a good thing - it was pretty cheap so you definitely get your money's worth. It was hop-on-hop-off, so we got to hop-off at Revolution Square, where we'd been wanting to go anyway. 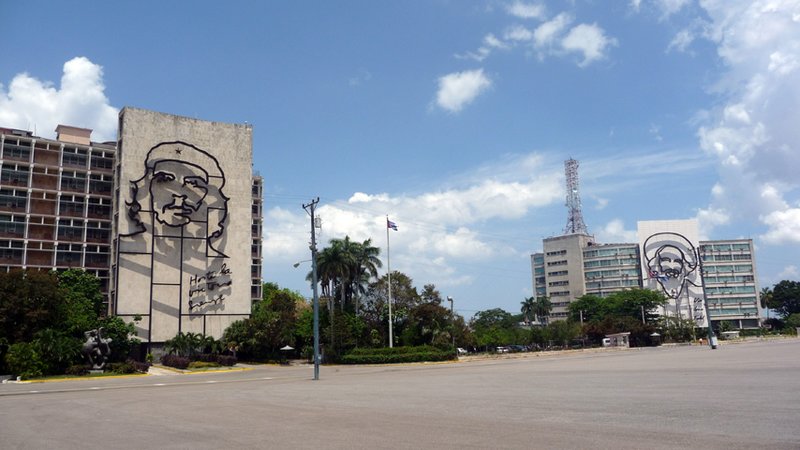 Our third and final full day was a more laid back affair, exploring some areas we'd not been to yet and relaxing in various bars and a rooftop patio, drinking beer (which is nice and cheap!). I did also have a Mojito during my time in Havana, as felt it had to be done.

Our evenings in Havana were interesting - although places would be buzzing during the day, they often seemed to empty out in the evenings. All we could fathom is that people staying at resorts were possibly going back there for their all-inclusive meals. This meant it often took us a while to choose somewhere to eat, as we didn't want to sit alone in empty places. We were entertained during our searches though - on multiple nights we saw a small dog that was wearing a hat and glasses, plus on the second night we saw a dog that had a mouse standing on its back. This was seemingly a ploy to get tourists to take photos and then give money to the man who'd had this crazy idea. I didn't oblige and therefore have no photographic evidence I'm afraid.

Strange dog sightings aside, we did find places to eat. On the first night it was a Parisian bar that served Italian food, which was alright, though nothing special. However, on the second night we came across this hotel restaurant that had the menu out front (and thankfully didn't have someone trying to shove it in your face and drag you into their establishment, as too many places tried to do) - it looked decent and had some veggie options for Jamie, though we couldn't actually see inside to know whether or not it had other people in it. A waiter noticed us looking and asked if we wanted to come in. We went in and... it was dead. Not only that but it was quite fancy looking, complete with a guy playing the piano. We were wearing combat trousers and t-shirts and were coated in an unpleasant mixture of sun cream, bug spray and sweat. Attractive. The waiter brought our beers to us and poured them in our wine glasses. Classy. No-one else was there! It was so awkward, but that also made it incredibly funny. Between fits of giggles, we both had the black bean soup to start with and then had vegetable cannelloni. Thankfully, during the main course, some other diners appeared. Hooray! The food was really good too - my favourite meal we had in Havana. On the third night we made sure to find somewhere with other people in. The food there was less impressive, but we had a good time pondering whether or not the waitress had buttock implants. I swear we're not usually that pervy, she just had a noticeably strangely shaped bottom and we wondered if it was intentional. Alas we'll never know.

On our departure from Havana on the 22nd, our Casa hosts gave us a present of some decorative cups, which was really sweet and thoughtful. I definitely recommend Casa Ana Morales if you're ever in Havana - they're really lovely, Alberto speaks good English and their apartment's really well located for walking to all the main areas of interest in Old Havana.

After living and working in Toronto for the past 11 months, my boyfriend Jamie and I are starting a 9 month travel adventure. This blog will detail that adventure - although the amount of detail depends on how often I get the chance to update it. I suspect it'll mostly be written whilst on various modes of transportation.

I'll save you a long and rambling introduction, though mostly because there are still things we need to sort out before leaving, which are somewhat more important than blogging (believe it or not).

Our travel route will be revealed as we go, though I can let it slip that our first destination will be Cuba. Tomorrow is my last day of work and then the following day we'll be getting on a plane. It all seems a little surreal at the moment...