We had an overnight flight to Buenos Aires, though we had to change in Newark first. Despite all our previous travels, neither Jamie or I had ever had a connecting flight before. Thankfully it was all straightforward and smooth. The weirdest part was needing to go through US immigration, albeit whilst we were still in Canada. We got the stamp in our passports and everything.

When we arrived in Buenos Aires we got a taxi from the airport to our hostel - The Ritz (makes it sound fancier than it is!). It was an ok hostel, though nothing special. The best thing about it was that it had one of those old fashioned lifts where you have to open and close the doors by hand - that kept me entertained for our entire stay there (I'm easily entertained). We'd booked into a private room, albeit one of the 'basic' ones, which was pretty basic, though we had an ensuite and a TV, so not bad. The first room we were put in, however, had a broken toilet seat, plus some wires dangling from the wall, plus it was right next to the lift, which was pretty noisy. We complained about the toilet seat in the hope that they'd fix it or something, but instead they moved us to a different room. It was pretty much the same, except the toilet seat was fine, it didn't have dangling wires and although it was still next to the lift, it didn't seem as noisy, so a definite improvement! Breakfast in the hostel was decent - cornflakes, small croissants, bread rolls, coffee, tea, juice and yoghurt - although they weren't always great at keeping it all topped up. Plus the coffee was horrible, so minus points for that. The location was good though - very central.

One instantly noticeable thing about Buenos Aires is that there's a hell of a lot of traffic. The central area, particularly, is full of wide roads and always seems really busy. It takes away from the beauty a bit, but there's still plenty of beauty to see, you just often have to stop and look up, rather than viewing things at eye-level. There are lots of areas where your eye-level view will be of slightly-dingy shops, whereas there's some beautiful French-style architecture just above them. We have the free walking tour to thank for pointing that out to us. That was definitely a good thing to do - the tour guide, Gaston, was great - entertaining and informative - plus it's free! Tipping's recommended though, of course. It lasted about 3 hours, but the time just flew by.

Other things we did whilst in Buenos Aires, included...
- Walking around Recoleta Cemetery, which is huge and full of extravagant and ornate graves: 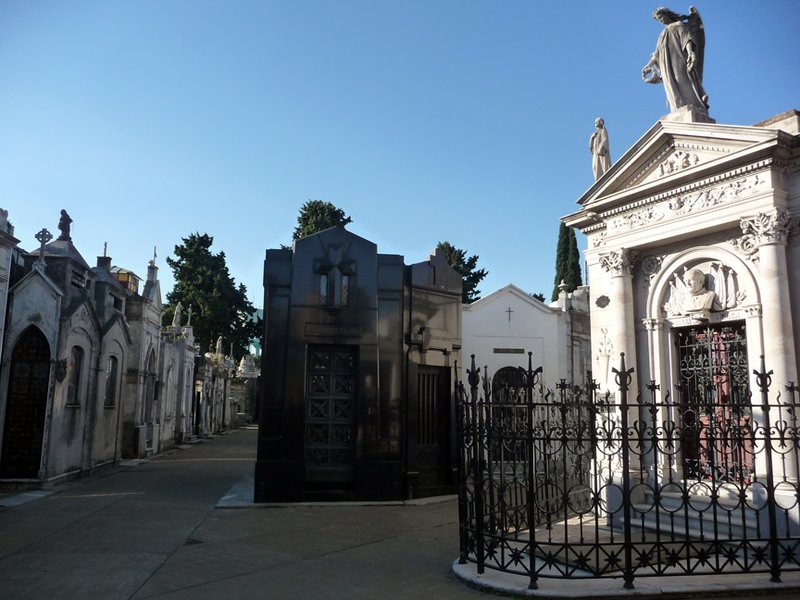 - Going to the Museum of Decorative Art, which is free on Tuesdays (when we went).
- Going to the Cathedral, which doesn't obviously look like a cathedral from the outside, but does from the inside
- Walking around a few different neighbourhoods, like San Telmo and Palermo, where you get cobbled streets and such like.
- Going to the El Ateneo Grand Splendid book shop, which is in an old theatre: 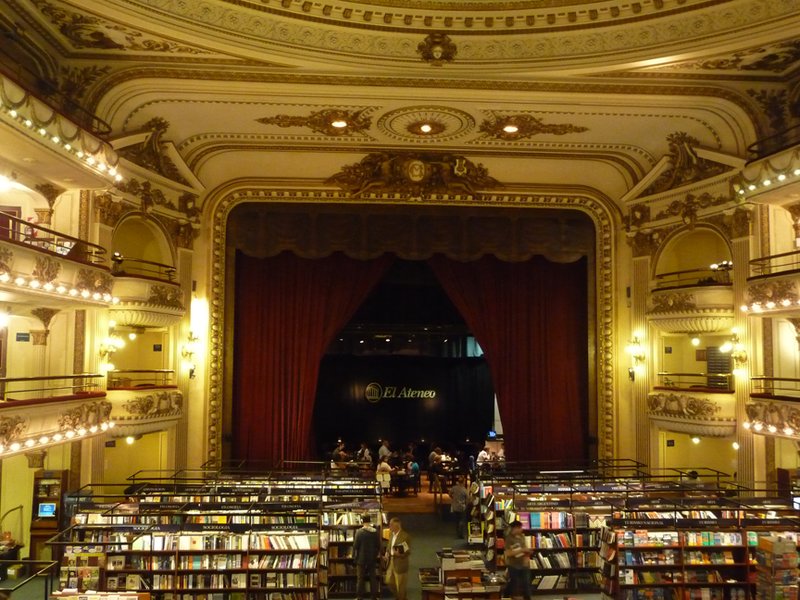 We also witnessed quite a few political protests going on. We thought we'd just arrived at a time that coincided with some kind of political movement, but no, apparently you get them practically every day! They all seemed really peaceful and good-natured though.

Food-wise, I don't think I've ever seen so many pizza places in one city! We ended up having it a couple of times, just because it was difficult to find anywhere else. Even when we didn't have pizza, it was generally Italian food. One evening we came across a place that had a great deal going - we had a main course with a side dish, a glass of beer, a dessert and a glass of limoncello, all for about $10 CAD (about £6.50). Awesome!