We arrived in Barcelona early afternoon and checked in to Hotel Medium Prisma. It was another Hotwire booking, though just a 2 star this time. Still, decent enough - no complaints as far as I can recall. We got settled in and then went and met up with my friend Rachel who'd arrived in Barcelona the previous day. We went for a drink to catch up, then a bit of a wander, then another drink (in a place called Cat Cafe that had some nice ales), then for some tapas and sangria (had to be done). There was then one more drink after that as well, if I remember correctly.

On our one full day together in Barcelona, we managed to fit in a lot of sightseeing. First off, after some breakfast, we went to La Sagrada Familia, which sadly was undergoing renovation and therefore was covered in scaffolding etc. Pretty disappointing, though it's been a recurring theme during our trip so far. Paper frog was pretty sad about it: 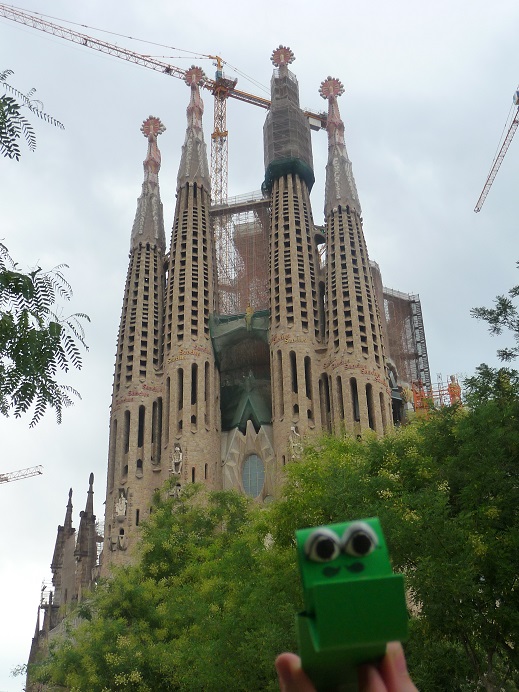 We then got the subway up to Park Guell where there's a lot of Gaudi architecture. We were quite fortunate with the subway station we chose - there are a few that are a similar distance from the park, but we happily chose one where you exit at the top of the hill (pretty much), so you can then walk back down through the gardens, rather than having to walk up them. The park was great, though there were tourists everywhere (damn tourists!). That was generally the case in Barcelona though - it's a popular place.

After some lunch we walked some more, taking in the Arc De Triomphe (no we weren't lost) and the funky harbour bridge, amongst other things. It then took us a while to find somewhere to eat (not unusual for us), but we settled on a place with curries and falafel where one of the waiters seemed to take a liking to us (or possibly just wanted a big tip!) and was joking with Jamie about having 2 wives and offering to take Rachel for himself. I'm assuming we left him a tip (though didn't leave him Rachel).

The last main sightseeing destination for the day was the musical fountain. I'd really been looking forward to it and it didn't disappoint. It's a pretty big fountain with a music and lights show. I was pleased we arrived while the classical music and movie soundtrack songs were still being played, as they worked much better at giving a grandiose effect than the pop songs did that they started playing slightly later. Call me crazy but I think there's something much more captivating about a large colourful fountain being backed by the music from Star Wars and ET than there is by one accompanied by Call Me Maybe. 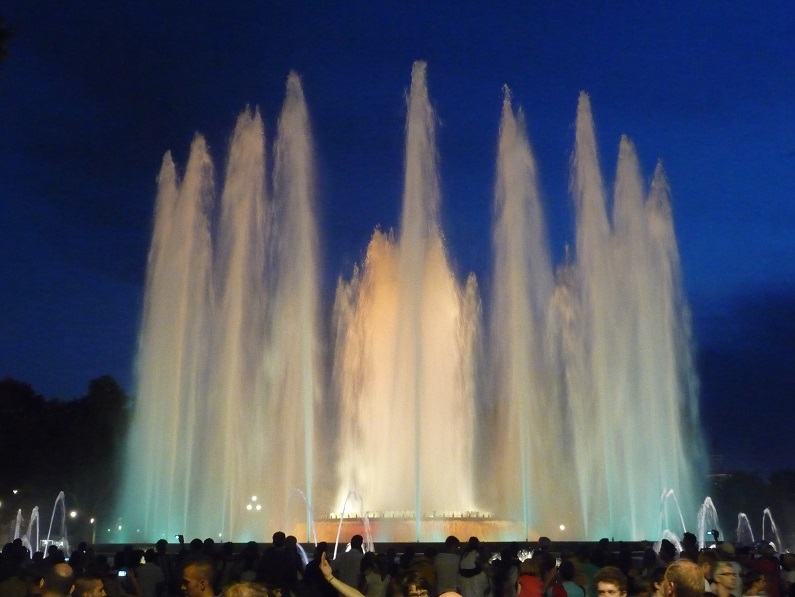 Annoyingly, some of my photos from the fountain weirdly disappeared from my camera, including one of me with Rachel, one of me with Jamie and one of Paper Frog looking happy. Grr. Not sure why it happened - my camera's never done it before. I think it's jealous that Jamie's camera's better now, ha ha.

We spent quite a while at the fountain, which did mean we missed out on seeing the phallic gherkin-esque building all lit up, but I'd imagine it would have been an anti-climax anyway. Instead we went in search of a bar and discovered that you could take a lift up to the top of the Arenas De Barcelona for just 1 Euro and get a good view out over the city. That was a great discovery. Plus there were restaurants/bars up there so we went for a drink as well.

The next morning we met up with Rachel for a farewell brunch before she had to catch her bus to the airport. It was really good to see her and it made a nice change to have a slightly different dynamic for a couple of days. After saying goodbye we headed back to the hotel for a bit (grabbing an ice-cream on the way - I'd not mentioned the weather, but it was hot) and caught up on some practical things before going out for dinner - Wok To Walk, but of course.

It was also in Barcelona that my tablet computer randomly died on me too. Literally out of nowhere it just stopped working. Some googling led us to discover it's a common fault with the Acer Iconia A100 - they'll just stop working, generally after 12 - 15 months of ownership (I'd had mine 15 months), so just outside of the warranty. Very very annoying. So at the moment I'm reliant on Jamie's netbook for blogging and general internet usage. I'm hoping I'll be able to pick up some cheap replacement somewhere - just a basic internet device that only has to last until the end of the year. Fingers crossed.

We had an overnight train from Lisbon to Madrid. The sleepers were a lot more expensive than just having a seat, so we opted to just have a seat. Unfortunately, what we'd not known in advance was that the train was seemingly constructed in the 70s and hadn't been touched since. The seats were uncomfortable and ours weren't even securely fastened to the floor, so we'd rotate about when the train turned corners. Great fun. Plus the group of guys behind us talked incessantly for most of the journey. It seemed impossible that we'd get any sleep, but we did manage small amounts once the guys behind us shut up. Still, we were pretty exhausted once we got to Madrid. Unfortunately it was quite early for checking in to a hotel, so we didn't want to make our way straight there. We killed some time in the station first of all and got some breakfast. We then made our way to our hotel, arriving there about midday. We'd thought that might still be a bit too early to check in, but thankfully it wasn't. We stayed at Gran Ayre Hotel Colon, which we'd booked through Hotwire. It was a 4 star, so pretty swish for us. There'd not been many options in Madrid though - crazily it was cheaper to stay at a 4 star hotel (albeit one booked at a reduced price) than to stay at a hostel. It was a welcome bit of luxury after our night on the train. We spent the rest of that day relaxing, doing some planning and also popping out to get food.

The following day was our only full day in Madrid, so we tried to cram in as much as we could. It was very hot though, so that slowed us down a bit. We mostly walked around and took in various parks and monuments, though we also went in some book shops with English language books (as we were lacking in reading material). One of the book shops (a second hand one) was also a bar! Brilliant combination. I bought a book and had a beer. Awesome.

We've spent so much time in hot countries these past few weeks, I've eaten more ice creams and ice lollies than I have done in years! Not complaining about that mind. I'd forgotten how refreshing Calipos were. I also got to have a Mojito Solero, which wasn't quite as awesome as I'd been hoping, but was still pretty nice. Anyway, from Madrid we took the train to Barcelona - thankfully not overnight and thankfully a much nicer train.