I didn't actually see any of Phuket, aside from the airport, but still, that's where I re-entered Thailand. Jamie and Martta had been in Khao Lak, which wasn't far away, so Phuket was the best place for me to fly back in to.

The plan had originally been to then go on to somewhere else in Thailand - maybe Krabi - but due to time constraints and some impracticalities, it had been decided that we'd just fly straight on to Malaysia instead. Hence me not leaving the airport.

It was a shame to not get to see more of Thailand. I can't imagine that only seeing Bangkok was remotely representative of the country as a whole. Still, it's somewhere to go back to at some point, which isn't a bad thing.

We had a few hours before check-in, so found some benches to get a bit of sleep on. My body clock was already completely confused, so it didn't make much difference. However, when we did try to check in, we were told that we couldn't get our boarding cards unless we had proof of when and how we would be leaving Malaysia. This led to a panicked search for wi-fi, which we eventually got at a Burger King. We'd been planning to take the train from Malaysia to Singapore, but we discovered that flights were cheap and easier to book, so we got those sorted, showed the confirmation screen to the man at the desk and thankfully got our boarding cards in time for our flight.

We had a short flight to Kuala Lumpur, then another short one on to Langkawi. As the second flight was internal, we had to go through passport control in KL. We were expecting to be asked about our onwards travel plans, but no, all quick and simple. Oh well, the hastily booked flights to Singapore would still be useful.

From the bus station we took a taxi to our first accommodation in Bangkok - Siam Journey Guesthouse. It wasn't located in the greatest area, from a tourism point of view, but it was a nice hostel. It has rave reviews online, which are maybe a little OTT, but the reason for that is the sociable ethos of the place. It's not a crazy party place, but hanging out and talking and sharing some beers is encouraged. The actual accommodation though is pretty standard. We were in a 10 bed dorm, though I'm pretty sure it used to be an 8 bed dorm. Mostly because 8 of the beds had their own lights and plug sockets, whereas the bunk bed at the end of the room, didn't. And yes, that's the one we were given. Definite minus points for that.

During our time in Bangkok, I unfortunately got quite ill. I don't really know what it was, as I had a few different symptoms that didn't all start at once and weren't obviously related. My Mum's since suggested that the shock of my Dad's death might have lowered my immune system and just left me really susceptible to things, which makes a lot of sense. Anyway, it started on our second night at Siam Journey - I woke up shivering and just couldn't stop. I had to put extra clothes on, squeeze into Jamie's bed with him and have 2 duvets on top of me in order to get warm enough. It was strange.

We only stayed in the hostel for 3 nights, as we then wanted to have our own room for a couple of nights. We moved to a more interesting part of the city and stayed at a hotel I've unfortunately forgotten the name of. It was a really nice place and it meant I could get some proper rest, to try and get over my illness.

On our first night at the hotel, it was a full moon festival where people traditionally take floating candles down to the river, plus lots of Chinese lanterns are released. Our hotel provided a free candle float for each room, so we got to take it down to the river and lower it in. That was really nice to be part of.

I wasn't sure what I made of Bangkok in general. I'd heard really good things about it and had really been looking forward to it, but I just didn't really see the appeal of the place. Maybe I just didn't get to see enough of it, with being ill an' all.

On the Tuesday we made our way to our third and final accommodation in Bangkok. We were back to a hostel, though it was just down the road to the hotel we were checking out of. It was called Born Free and it was OK. Again it was quite sociable, though I definitely preferred the vibe at Siam Journey. The reason why we were back in a dorm was that Jamie's friend Martta was joining us from Finland for a while. Jamie picked her up from the airport and then we were all able to check in.

We stayed in a 12 person dorm, which is far bigger than I like dorms to be. It was a weird setup as well. The bunks were arranged in sets of 2, so your bed would be right next to someone else's, with hardly anything between. The lower bunks had dividing curtains, but the upper bunks didn't. We were all on upper bunks, though Jamie and I got to go next to each other and Martta was put with another Finnish girl. Albeit a Finnish girl who ended up sleeping in the bed of someone else anyway. A fact that I was aware of due to waking up in the night and hearing them having a very good time! I felt sorry for the guy in the bed right next to them.

Anyway, on the following day, my last day in Bangkok, we went to the Grand Palace. That was easily the most interesting and impressive place we went to in Bangkok, so I was pleased I got to see it. 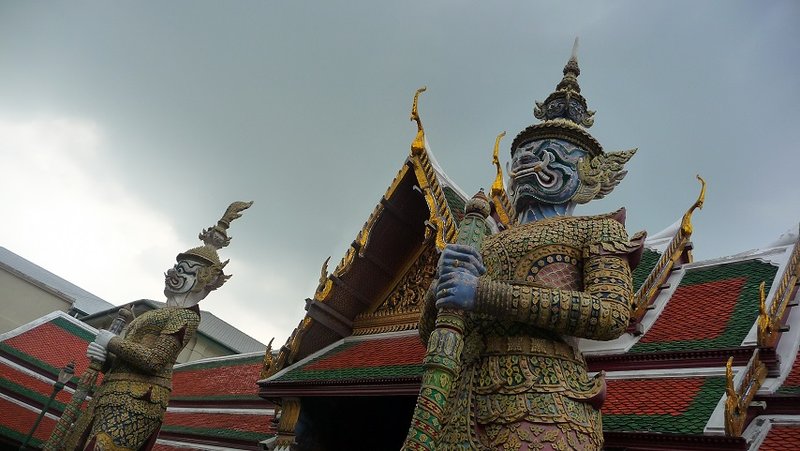 In the evening we met up with Tyneil and Daniel for dinner, as they'd just arrived in Bangkok. It was good to see them again. We then had to head off back to the hostel though as I'd booked on to a shuttle bus to take me to the airport. A date had been decided on for my Dad's UK memorial service, so I needed to be there. I said goodbye to Jamie and Martta and took a very bumpy minibus to the airport.