We got 2 buses to the airport in Montevideo, which was a bit of a hassle I guess, though not hugely so - plus it was a lot cheaper than getting a taxi. The flight to Chile was then only about 3 hours. From the airport we got a bus to a subway station, then the subway to the city centre. It was then just a short walk to our hostel (Plaza De Armas Hostel). The location was great - really central, plus looking out onto the main plaza - it was up on the 6th floor and the view from the balcony was awesome. However, the hostel itself wasn't brilliant, which was a shame. Breakfast was a bit paltry - 2 slices of bread (which you could toast), a cheese slice and 2 slices of pepperoni. Plus tea and coffee of course, but still, not even cornflakes. There was one day that we also got a bonus little cake, though that was just the once. The bins in the toilets weren't emptied as often as they really needed to be either - which in general you wouldn't think of as being a big deal, but when you know that the toilet paper can't be flushed and has to go in the bins... yeah. The shower situation was a bit weird too - they were split into male and female, but mostly because you had to get changed and put all of your stuff in a communal area. As a modest Brit, that was a tad disconcerting to me - getting naked in front of strangers? Crikey! Happily the hostel wasn't that busy, so there was only once that I had other people showering at the same time as me, and then I managed to utilise the shower curtain to retain my modesty (or at least I think so - it wasn't totally opaque). The fact that the dividers between the 3 showers were practically transparent too was an added bit of pervy weirdness. Still, despite not being the best hostel, it was all right and we had a good time.

The view from the hostel: 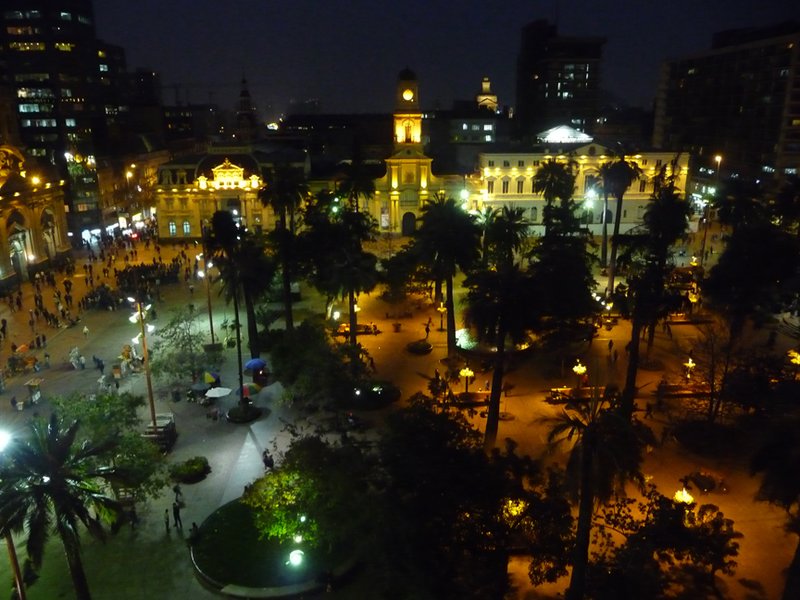 Santiago's a really nice city - it seemed pretty chilled out, maybe due to all the wine. Some of the things we did during our time there:

- We went on another free walking tour. This one was led by a Scot called Johnny. He was good and seemed to know his stuff. It was 3 1/2 hours long, though included a stop for a drink. Afterwards we went for more drinks with a Canadian lady we met on the tour.

- We went to a few museums. The Museum of Memory and Human Rights is generally considered the best museum in Santiago and we spent quite a while there. It's free to enter, though as the exhibits are in Spanish, it's useful to pay the 1,000 pesos (about $2) to get the English audio guide. It's all about the Pinochet regime and remembering all the people who were "disappeared" under it. My history knowledge (including things like that, which happened within my lifetime) is pretty bad, so I found it all really informative and interesting. We then went to a few other museums on the Sunday, as Sunday is free museums day! As in a day when museums are free, not a day when museums seek their independence. Those museums included a couple of art museums, which were both good, albeit pretty small.

- As you have to do when in Chile, we went on a vineyard tour and wine tasting. There are numerous options near Santiago, but we went for the Undurraga vineyard as it didn't sound overly commercial and had good reviews. We also had a discount voucher for it, so we got the tour for about $12 each. As we were the only people wanting an English tour at the time we selected, we got our own private tour from a guy called Dave. We got to walk around the vineyard itself and taste some of the grapes from the vines. We then saw the process the grapes go through and one of the wine cellars. Then finally came the tasting! We got to taste 4 wines - which is another reason why we opted for Undurraga - some of the other vineyards only offer 2 wines for tasting. We got to taste 1 white, 2 reds and a dessert wine. We then got to keep the glasses - bonus! Although, sadly, I managed to drop mine on the way back to the hostel. Doh! Jamie's given me his though (aww), so I'm currently carrying that about in my suitcase. Not hugely confident it's gonna make it back to the UK intact, but I'm hopeful. I'm padding it with pants and socks, so it'll either make it safely or I'll end up with glass in my underwear (ouch). 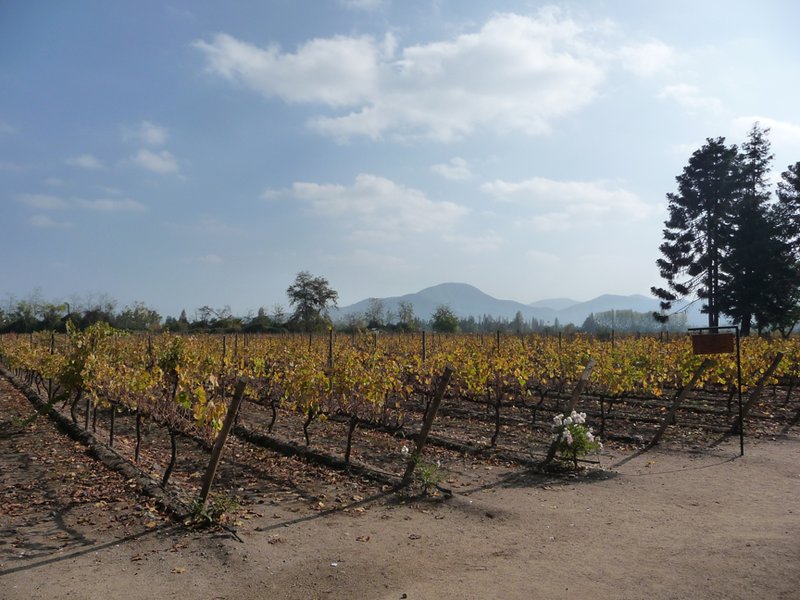